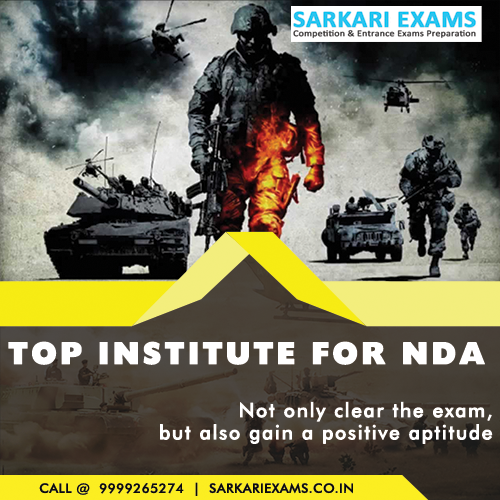 What is NDA & NA Examination? The National Defence Academy also called as NDA is the well-known platform for providing training to the three wings of Indian Defence Services known as Indian Army, Indian Navy and Indian Air Force based at Pune, India.

Sarkari Exams is the leading brand of India for NDA Coaching in Delhi, We are providing best faculties, Test Series and study materials  for NDA Exams preparation in Delhi, Here you will get free Monthly E-Magazine and 200 MCQs every months for better current Affairs of NDA Entrance Examination preparation. We have online and offline both facilities for NDA test Series  as well as we are also providing free of cost weekly and topics wise test for for best preparation of NDA written Exams in Delhi. Now you can ask for demo classes for see the difference from other Coaching centre of Delhi. Our expertise are unique and rich Experience for NDA test preparation in Delhi. Sarkari Exams is a well known Academy for NDA exams preparation in Delhi, Here you will get free android application for better preparation of NDA Exam by which you can yourself in Indian Defence Academy  of our country.

UPSC conducts NDA entrance exams twice in every year. Applicants are selected via a written exam, followed by (SSB) interviews including a general aptitude test, psychological testing, and team skills as well as physical and social skills, along with medical tests.

Admission Criteria for NDA & NA: Admission to the National Defence Academy (NDA) is conducted two times in a year through NDA entrance exams, Conducted half-yearly by the Union Service Commission (UPSC). The person getting success in qualifying the NDA entrance with the help of NDA coaching institute in Delhi undertakes many rounds of interviews, which includes physiological test and group testing followed by a thorough medical examination.

Nationality- A candidate must be either:(a) A citizen of India or(b) a subject of Nepal, or(c) a subject of Bhutan, or(d) Refugees from Tibet who come to India prior to Jan,01,1962 with the objective of permanently residing in India.(e) People migrated from Pakistan, Burma, Sri Lanka, East African countries of Kenya, Uganda, the United Republic of Tanzania, Zambia, Malawi, Zaire, Ethiopia and Vietnam of Indian origin with permanently settling intention in India. An applicant who belongs to the above said categories (b), (c), (d) and (e) shall be a person whose eligibility certificate has been issued by the Government of India.

Date of Birth Certificate: The date of birth accepted by the Commission as in the Matriculation or Secondary School Leaving Certificate or in a certificate by any recognized Indian University or an extract from a University Register of Matriculate. These extracts from the university should be certified by the proper authority of the University or the Higher Secondary or an equivalent examination certificate.  Not any other certificates like horoscopes by astrologers, affidavits form Notary, birth extracts from Local Municipal Corporation, Employee service records and the like will be accepted. The DOB entered in the Union Public Service Commission, no change is allowed subsequently (or at any other Examination of the Commission) on any grounds whatsoever.

Educational Qualifications: For admission to the examination, a candidate must have (any one of the following):

For the Army wing of (NDA): 12th Class pass of the 10+2 pattern of School Education or equivalent examination conducted by a State Education Board or a University.

Candidates whose 12th result are awaited or are appearing in the 12th Class under the 10+2 pattern of School Education or equivalent examination can also apply for this examination.

The selection process of NDA & NA will complete in 3 stages

There will be 2 stages in SSB- part I & part II. The qualified candidates of part I will be called for part II.

Sarkari Exams Coaching Classes are pleased to introduce ourselves to you as a old Brand of India for NDA Exams Preparation in Delhi. Sarkari Exams Coaching Classes is a leading Brand specially for NDA Competitive examinations Preparation in Delhi. We provide the best Section Wise Test Series for NDA Exams curated by ours Experts. The NDA Mock test series are based on the latest pattern and syllabus which give students hands-on experience for appearing in exams of NDA. We have more than 500 test series including Topic wise, weekly and previous years of NDA Examination. These tests increase accuracy and speed of the students to crack NDA Examination. Our Study Materials are up to date as per New pattern of NDA written exams. Now you Google searching is ended here as which is the Best  NDA Coaching in Delhi? Sarkari Exams Coaching Institute Is the Best Coaching Institute for NDA Exams Preparation in Delhi.