Sarkari Exams offers Central Police Force examination coaching in Delhi to the aspirants and prepare them well for the written examination. We own an experienced and proficient team of teachers who invest their hard work in clearing off the doubts countered by the students and guide them in the best way to enhance their confidence. Along with the effective and comprehensive study material, we initiate regular mock tests and solve previous years question papers to give the student a detailed insight of what they are going to face in the final round and in what manner. 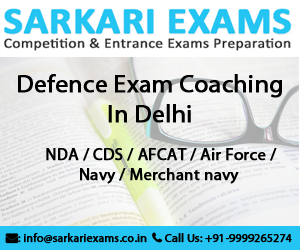 Our coaching institute for Central police force examination in Delhi provides the students with complete guidance over examination pattern and proper time management that helps them in gaining fruitful result at the end.

(i) Notification of Examination: May

(B) Scheme of Examination

The upper age limit prescribed above will be relaxable in the following cases:

Scheduled Castes, the Scheduled Tribes and the Other Backward Classes who are also covered under other clauses mentioned above will be eligible for grant of cumulative age-relaxation under both the categories.

No other document relating to age like horoscopes, affidavits, birth extracts from Municipal Corporation, service records and the like will be accepted.

Once the date of birth is recorded in the Commission, no change will be allowed subsequently (or at any other Examination of the Commission) on any grounds whatsoever.

The candidate must hold a Bachelor’s degree of a recognized University or posses an equivalent qualification.

Candidates must meet the prescribed Physical and Medical Standards for admission to Central Police Forces Examination (Assistant Commandants). The details are specified in the Scheme of Examination section.

Possession of NCC ‘B’ or ‘C’ Certificates:

Possession of NCC ‘B’ or ‘C’ Certificate is a desirable qualification. These qualifications will be given consideration at the time of Interview/ Personality Test only.

Sarkari Exams is keenly interested in reaping maximum output from their teaching endeavors on the students appearing for the examination conferring Assistant Commandant Position. We make the student learn through the advance guidance provide by the mentors along with organized and systematic approach towards exam clearance and result attainment. We work on the mission to deliver guaranteed success rate through our coaching program.